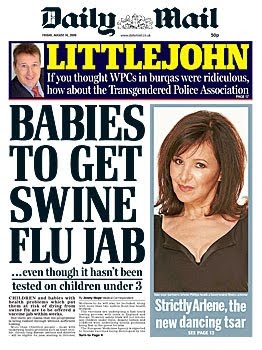 If you thought paying Gordon Brown a salary of around £200,000 is ridiculous, then how about paying a talentless twat like Richard Littlejohn around £850,000?

This rhetorical technique is used on the front page of the Daily Mail today by Richard Littlejohn to poke fun at the transgendered Police Association, as if the very notion of such a group could trump all of his previous snide and offensive articles. The enemies of reason has already posted on this, so I’ll use some of his words here to save repetition:

I imagine it brings together police officers who have to put up with the kind of sanctimonious carping from smellyfaced cunts like Richard Littlejohn day in, day out; people who, because of their legitimate lifestyles are ridiculed and held up as some kind of freak by utter bastards like the foul stinky scumbag tosspieces who work for the Daily Mail. Just for being who they are. Oh yes, Littleman, let’s all gather round and have a fucking right old laugh about PC gone mad – hey, see what I did there? – in providing support and assistance to people who choose to do one of the toughest jobs in the country, and do so despite sexual proclivities that idiots like you, you fucking gobshited pig-eyed prick squatting in judgement over everyone’s lives in Britain from your gold-plated Florida mansion, regard as being worthy of hysterical abuse and being singled out as somehow deserving of mockery.

Many bloggers have attempted to convey just what a vile little man Richard Littlejohn is but it’s hard to really get across just what an unmitigated cunt he is. The photo next to the tag-line shows a grinning columnist who looks as if he has just written a fluff piece on an interesting dinner party he attended; when in fact he has just spent hundreds of words essentially pointing and laughing at people slightly different to him. He never changes the picture, whether he is explaining that he doesn’t give a shit about genocide when it happens to black people; or telling us that prostitutes deserve to be murdered or whether he is spending an entire column creating a hellish image of just why gypsies are evil, feral scum.

I like to think that Richard Littlejohn is a bit like Dorian Gray in reverse, he has sold his soul to the devil (here played by a succession of tabloid editors) who snapped the above photo of him which is printed each week next to his columns and he’ll live for eternity as long as the photo survives. However, instead of the picture ageing and showing all the horrific signs of evil, it is in fact the real Richard Littlejohn who is decomposing with each column written – to the extent that he has had to board himself up in a mansion in Florida where he spends his existence like the mad women in the attic from a popular Gothic novel.

If you laid eyes on Richard Littlejohn you would barely recognise him from his gurning photograph. His hair is actually lank and grey, clinging to his scalp with the oozing puss that seeps from his rotting brain. Shit, blood and urine are sweated through every pore in his clammy, white carcass. Great chunks of flesh drop from his sagging face as he attempts to email his latest article to Daily Mail HQ; his fingers are reduced to bone and tendon by the many years of poisonous key-tapping. Due to his condition he is unable to engage in any real debate, and he is instead forced to attack increasingly obscure and powerless targets: 3 woman who wore Burqas, a Police Association for the Transgendered for example.

Long ago the stinking, decomposing pile of shit gave up trying to engage anyone – right around the time that Johann Hari and Will Self both calmly pointed out the Richard Littlejohn’s universe was entirely fictional. Richard Littlejohn is a coward, he has a stage from which he could engage in real debate but he chooses not to. He knows that he is an intellectual fly, so, like the fly, he survives on a diet of shit – regurgitating Daily Mail stories as satire whilst pursuing his own targets that he knows cannot possibly respond.

If you are a minority or somehow disenfranchised from mainstream society in any way, beware, because a cowardly, hateful little cunt called Richard Littlejohn is out to get you.

Apologies for the strong language used in the above post. I usually decline from being too free with swear words, but at the same time I know that a swear word is sometimes needed to emphasis an emotion. I do not use the c-word lightly, but I cannot think of a word more offensive and thus fitting to describe Richard Littlejohn.