Obsession with WAGs led to the murder of a young lady, says the Daily Mail.

Amy Barnes, the young model recently murdered by her ex-boyfriend, was in fact “killed by a tawdry dream”. It’s the Daily Mail‘s latest verdict, according to an article by Paul Bracchi.

“How the obsession to become a WAG“, the headline goes, “led this beautiful girl into the arms of a violent psychopath“, with the conclusion that “had she not been sucked into the tawdry world of nightclubs and footballers – she would probably have never met [her killer Ricardo Morrison]”.

Sure enough, according to our Mail churno, Amy Barnes’ Facebook memorial page is “the subplot to this tragedy”, as it contains a flurry of pictures of girls -including Amy- in revealing outfits, cleavages, panties and stilettos. So disgraceful are those Facebook pictures that the Daily Mail decides you too should have a look at them, including one of the victim sucking a lollypop. “Sucked into the lifestyle” is the accompanying caption.

Then Bracchi goes on with his portrayal of Amy’s world, “where nightclubs, glamour modelling and the ultimate prize – ‘bagging’ a footballer – are a full-time career for many girls; like getting a normal job would be for most other people”. “You might call such girls the Hollyoaks Generation” Bracchi adds, “Off screen, the cast of the Channel 4 soap – ‘about babes and boys’ – are forever stripping off to their underwear for calendar shoots”.

So what may this cruel, cheap and “tawdry” world look like? Who exactly is behind this increasing obsession with the lifestyle of the rich and the famous?

It may be that Bracchi doesn’t read the paper he works for, because the number of stories glamourising WAGs shopping about town, displaying scantily clad models in the company of Premier League stars as well as pictures of glitzy Footballer’s Wives-style parties is just unbelievable.

It really is that blatant. In fact, right next to Paul Bracchi’s article online, there is a picture of Eastenders star Kara Tointon (sister of Hollyoaks actress Hannah) “showing off her curves as a lingerie model”. 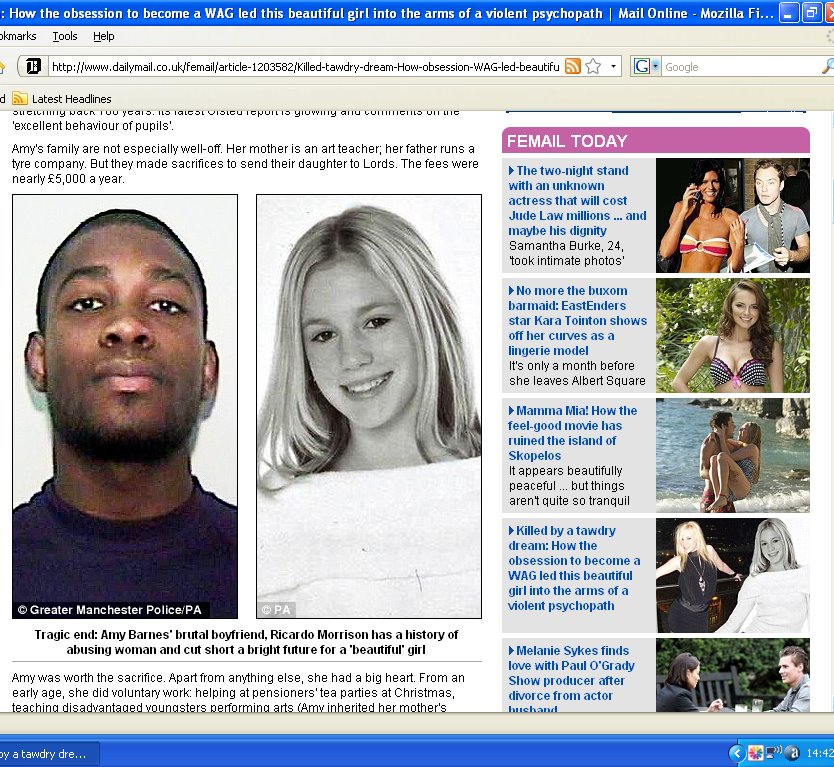 Scroll down one bit and there’s Victoria Beckham seen “in ripped denim hotpants and tiny vest”, further down Boris Becker’s new model wife as well as Cheryl Cole at the X Factor auditions.

It is truly a tawdry, tawdry world those young girls are drawn to.

This article originally appeared on Hagley Road to Ladywood.