The Daily Mail has today published a ‘Special investigation’ (I think this term might simply mean ‘not copied and pasted from news agency’) ‘into the distress of grieving families caused by the sick internet craze of “trolling”‘.

Elsewhere, the Daily Mail website has collected its own ‘trolls’ and publishing a column for them today is one Kelvin MacKenzie. You might remember him, he was the Sun editor who decided to go with the following headline after Hillsborough: 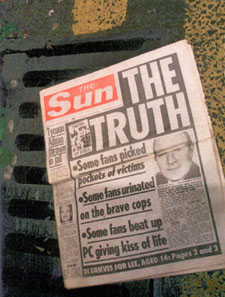 According to a very well referenced and tightly edited Wikipedia page:

The story accompanying these headlines claimed that “drunken Liverpool fans viciously attacked rescue workers as they tried to revive victims” and “police officers, firemen and ambulance crew were punched, kicked and urinated upon”. A quotation, attributed to an unnamed policeman, claimed a dead girl had been “abused”, and that Liverpool fans were “openly urinating on us and the bodies of the dead”.

It was complete rubbish, rather like The Sun in general, and although MacKenzie made an half-hearted apology in 1993 he since took this back stating in 2006:

He also refused to apologise on Question Time in 2007. The Sun issued an apology ‘without reservation’ in 2004.

Just to make matters even more hypocritical, MacKenzie ends his collection of assorted dross today with this:

Don’t know about you, but the regular stories about burglars being killed by home-owners are cheering me up no end. Do you think our Justice Minister might make it mandatory?

Rightminds, where the ‘sick’ Internet trolls get paid.