A reader has been in touch with another story that has appeared in a few newspapers today (Daily Mail, The Mirror and the Metro) about a suspected female thief who for some reason became enraged enough at being challenged to throw her child on the floor and stamp on it, in full view of a group of people who either stood around and did nothing or just took two photos.

Notice how the child looks identical in each – same facial expression, arms in exactly the same position and identical shadow. Judging by the way everybody is stood around ignoring the baby, I would suggest this is a photoshop job, or a doll – unless these newspapers are seriously suggesting that ‘foreigners’ are so evil they just stand, a few inches away from a screaming child lying on the road after being thrown and stamped on and do nothing. I certainly think this is a made-up story, although Google hasn’t helped me find anything concrete. Well, more concrete than a child that has been thrown on the floor, stamped on, yet appears unharmed and according to all three press reports: ‘Miraculously, the baby escaped uninjured.’

I am pretty confident that I have conducted more research into the veracity of this story than any of the newspapers did, and I’m sure someone with a sharper eye and more experience in faked images could probably point out some faults here and tell-tale giveaways.

This story is currently the top editor’s pick on the Mail website:

So, in this age of reason does the fact the child sustained no injuries, despite being ‘thrown’ and ‘stamped’ on, suggest:

a) the event clearly did not happen, or
b) a miracle has happened.

Clearly, the journalists at the Mail have chosen option b, for some good old-fashioned evidence free hysteria.

A reader (who wishes to remain anonymous) has emailed me with details of a website that attempts to demonstrate whether an image has been altered. Read about how the technique works here, and view image 1 here and image 2 here. I’ll leave you to draw your own conclusions, I think the results suggest the image could be worth further investigation and it certainly doesn’t do anything to alter my opinion that this story is complete rubbish.

For those of you reading this story and thinking that they couldn’t possibly make up a story like this, I’ll just remind you about this Express front page: 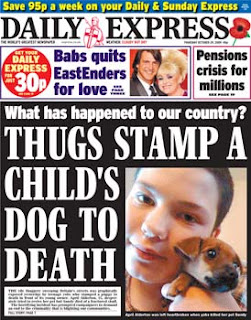 Which turned out to be completely made up.