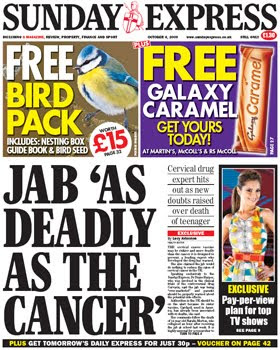 The enemies of reason has already labelled this as one of the most disgraceful front pages of all time and I am inclined to agree with him. As he goes on to point out, the headline is not backed up by the content of the article and the sceptical doctor make no assertion that the jab is as dangerous as the cancer is supposed to be. Still, since when have facts ever got in the way of a good headline? In response to this front page the Daily Mail are still dragging out any scare stories it can find about the jab, and give passing reference to the Express front page as if somehow their ridiculous lies are somehow evidence. This is pretty much standard fare for newspapers, instead of linking to peer-reviewed science they just simply link to their fellow tabloids as if the lie can become fact if other newspapers are running similar stories.

Today’s Mail scare story revolves around a teenage girl who started having epileptic seizures days after being given the injection. There is no evidence to link the jab to the seizures, and the only people making the connections are the parents of the girl. Whilst I have every sympathy for them and can understand their need to seek a reason for their daughter’s problems, it doesn’t mean that they are qualified to give an opinion on the matter, and any reasonable person should know that such an emotional response is hardly going to add anything to the debate.

What we need to understand is that shit happens. We live in a world populated by billions of people. A few people amongst us will die suddenly and without explanation, a few of us might suddenly develop seizures and so on. It is natural for the families around the victims to look for reasons, for an explanation or understanding of what happened. If perhaps the victim had eaten a new food for the first time, this might be blamed, if the victim had fallen over and banged their head, this might be pinpointed – it matters not what it is, anything can be blamed and whether medical experts tell you it wasn’t responsible for what happened subsequently is irrelevant, you tend to cling onto blaming it. It seems to be case here, their daughter had a cervical cancer jab, a few days later she starts to develop seizures and ends up with brain damage. The jab is being blamed only by the family, there seems to be no evidence to suggest a link otherwise the Daily Mail would clearly give it here.

So the whole story is pointless scare-mongering, where the headline has little relation to the actual story and the whole thing is anecdotal.