I have had some criticism on Twitter and in the comments on site – not to mention from Melanie Phillips herself – for publishing contents of the emails that she sent to me. I can understand the criticism, and it is something I have never done before and I doubt I will ever need to do again. I do receive a lot of email correspondence through this site and I do treat it all in absolute confidence as anyone who has contacted me will know (hence why this has never been an issue in the years I have published this blog). The emails from Melanie Phillips I published today and yesterday will not change that.

I initiated contact with Melanie Phillips not really expecting any response – other journalists I have contacted regarding my Winterval essay haven’t even acknowledged me – so I think I was a little surprised to hear back from her so quickly. Her response was aggressive, condescending and contained only fallacious or irrelevant arguments and clearly demonstrated she had no intention of reading any of the essay to verify whether she had indeed mislead her readers.

I had started politely, but given Melanie’s past history of bile-filled attacks on all manner of subjects and her dishonest, underhand and disdainful attack on a 16-year-old boy yesterday I felt publishing her email was in the public interest. I say this because Melanie – whilst you may say that she is a columnist – can still be labelled a journalist and as such she is an example of the kind of writer that is happily accepted and handsomely paid during these heady times of press ‘self-regulation’. Her attitude towards a member of the public who had politely pointed out that she was guilty – I didn’t even say intentionally – of misleading her readers over the Winterval claim she made just demonstrated how utterly untouchable journalists / columnists believe themselves to be.

I published her words because I wanted to demonstrate why occasionally this blog descends into unhelpful, despairing swearing aimed at a certain journalist or columnist; it is the frustration of knowing that irrespective of fact, evidence or truth the people I write about will never engage with me or any other media blogger, no matter how extensively you may have researched a given topic or how clear the error is. Winterval is a myth. It is as simple as that.  It was coined in one city (Birmingham), for two years (1997 and 1998) and yet Melanie Phillips claimed that:

Christmas has been renamed in various places ‘Winterval’

That is factually incorrect in every possible way: 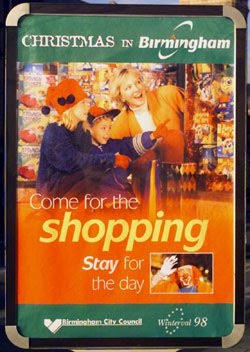 It cannot be any clearer that Melanie Phillips has mislead her readers by making a factually incorrect claim, and worse than that, she is repeating (indeed embellishing by making it ‘various places’ rather than just ‘Birmingham council’) a claim that has been debunked numerous times before and should never have been repeated again given that any Google search quickly reveals the truth.

All it needed from Melanie was an admission – one tiny admission in a career full of misleading or factually incorrect claims (she how she lost a libel case along with The Spectator after refusing to back down over untrue claims she made – rather than apologise she just repeated them) that she had got it wrong. However, she didn’t, she just responded in the same way as she always does, writing as if the truth inhabits a completely different realm to that occupied by Phllips. Even when provided with clear, irrefutable evidence that she was wrong, she couldn’t even admit it, let alone apologise to her readers or make any attempt to correct them.

That’s not abiding by the common etiquette that should come naturally to any writer, any writer irrespective of salary, audience or purpose. It is certainly entirely against the spirit of press self-regulation and the personal journalistic responsibility and basic integrity that should go hand-in-hand with such a system. This is why I – hypocritically if you like – also shunned any etiquette and printed her response. She has no rules when it comes to publishing words, so why should I? Let’s not pretend taking the higher ground is going to achieve anything when she can’t even admit to the tiniest of mistakes – and none of the Mail writers seem to care one bit about facts or truth.

It’s not as if the Press Complaints Commission are an option either.

So, I was left with an email from Melanie, and I took the opportunity to publish it, to hopefully destroy any fleeting belief that Melanie Phillips has any journalistic standards whatsoever, or even the vaguest interest in not misleading her readers.

So, sorry Melanie, for publishing your emails – but please clearly understand this: you were not damned by me, but by your own words.