OK, the Mac cartoon equating immigrants to animals has done the rounds and you’ve probably seen it by now. It has been retweeted around the twitterverse since @dailyquail tweeted it last night and has done the rounds via Liberal Conspiracy and Pickled Politics. Still, I feel it is important to at least mention it here for those of you that have missed it:

It isn’t subtle, it isn’t pleasant and above all: it just isn’t funny. It still staggers me that every year the Daily Mail brings out a ‘Best of Mac’ book just in time for Christmas. I guess you can laugh at Mac and buy the book every year, but only if you’re a racist. I’m sure people who regularly look at Mac’s cartoons would be able to point out a lot that really are just designed to stir up hatred of ethnic minorities, but I have one example that stood out enough for me to cover it quite some time ago: 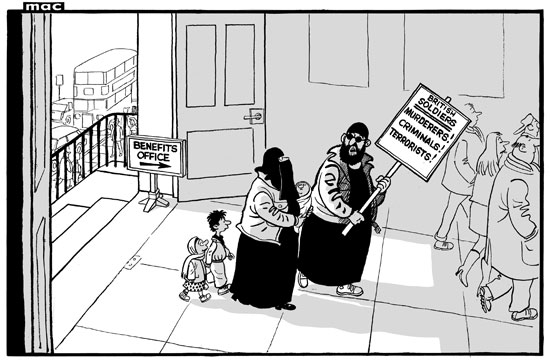 In reality Mac does little more than sketch the worldview of the Daily Mail, if you enjoy a Mac cartoon it’s because you enjoy reading the Daily Mail and both tally with your own view of the world. You probably think immigrants are no better than animals, and the idea of a multicultural marriage is as laughable or grotesque as marrying a sheep.

However, perhaps I’m not giving Mac enough credit, as a commenter on the Mail website muses:

This is hiliarious because you see the difference between humans and sheep are cultural differences. It’s not like they are another species, it’s just cultural. Mac is so funny lampooning how insane the right-wing are when they equate gays/other races with animals, it’s funny.

This is supposed to be a satire on pretty much the entirety of the Mail’s output, right?

Nice of the Daily Mail to let that comment through.